President Obama last Friday announced nearly $4 billion in combined federal and private sector energy upgrades to buildings over the next 2 years. The $4 billion investment includes a $2 billion commitment, made through the issuance of a Presidential Memorandum, to energy upgrades of federal buildings using long term energy savings to pay for up-front costs, at no cost to taxpayers. In addition, 60 CEOs, mayors, university presidents, and labor leaders today committed to invest nearly $2 billion of private capital into energy efficiency projects; and to upgrade energy performance by a minimum of 20% by 2020 in 1.6 billion square feet of office, industrial, municipal, hospital, university, community college and school buildings. 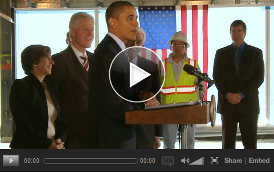 This announcement builds on a commitment made by 14 partners at the Clinton Global Initiative America meeting in June to make energy upgrades across 300 million square feet, and to invest $500 million in private sector financing in energy efficiency projects.
Prior to the press conference to officially launch theBetter Buildings Challenge, President Obama and Former President Bill Clinton took a tour of 815 Connecticut Avenue in Washington, DC They were greeted at the property by Transwestern President and Chief Executive Officer, Larry Heard, where they were led on a tour of the building and shown first-hand the energy upgrades made at the project and discussed how such upgrades positively impacted operating costs.
Gary Le Francois, a SVP Director of Engineering for Transwestern Property Management explained some of the technology and its benefits to the presidents. “The owner came to us and asked us to “bring the building into the 21st century and get LEED Gold Certification” and that is what we are doing. We brought in Jim Dautenhahn from DRI Development Services, who was renovating the entire building, to help us with the build out and Al Skodowski of our LEED and Sustainability Services team to help us with LEED certification. With the help of Tridium and HVAC Concepts, we installed a system using McQuay Turbocor Frictionless Chillers which use Magnetic Bearing Technologies and are therefore frictionless. We are micromanaging temperature using control valves every 20 feet and keeping tight control over airflow with Greenheck ultra low leakage dampers and 8 CO2 monitors on every floor. The chiller plant alone is saving the owner $193,000 a year in energy costs and moved the Energy Star rating in the building from 37 to 82 in one year.”
Meanwhile, at the Eisenhower Executive Office Building, Secretary of Energy, Dr. Steven Chu hosted the Better Buildings Challenge roundtable. The roundtable event featured over 20 executives whose companies have made a commitment to the Challenge.
Eric Mockler, President of Transwestern’s Mid-Atlantic region attended the roundtable. “Many key players in the industry were there including representatives from CBRE and JLL and owners such as RREEF, TIAA-CREF, USAA, Nissan USA and Walgreens. The initiative is a WIN-WIN-WIN by any definition. The environment wins as a result of the reduction in energy use and emissions, the economy wins as a result of the jobs created to do the work, and the owner wins because of the savings in operating costs.”
In a move the U.S. Chamber of Commerce has recognized as critical to job creation, today’s Presidential Memorandum calls for fully implementing existing federal authority to utilize Energy Savings Performance Contracts (ESPCs)in order to promote energy efficiency and create new jobs. Under the ESPC program, new energy efficient equipment is installed at Federal facilities at no up-front cost to the government. The cost of the improvements is paid for over time with energy costs saved on utility bills, and the private sector contractors guarantee the energy savings.

Out of the Trenches – A Video Conversation with Joe Rich, Tishman Speyer & Tom Taddeo, Kimco Realty

In the Trenches with Sandy Jacolow, CIO, Silverstein Properties